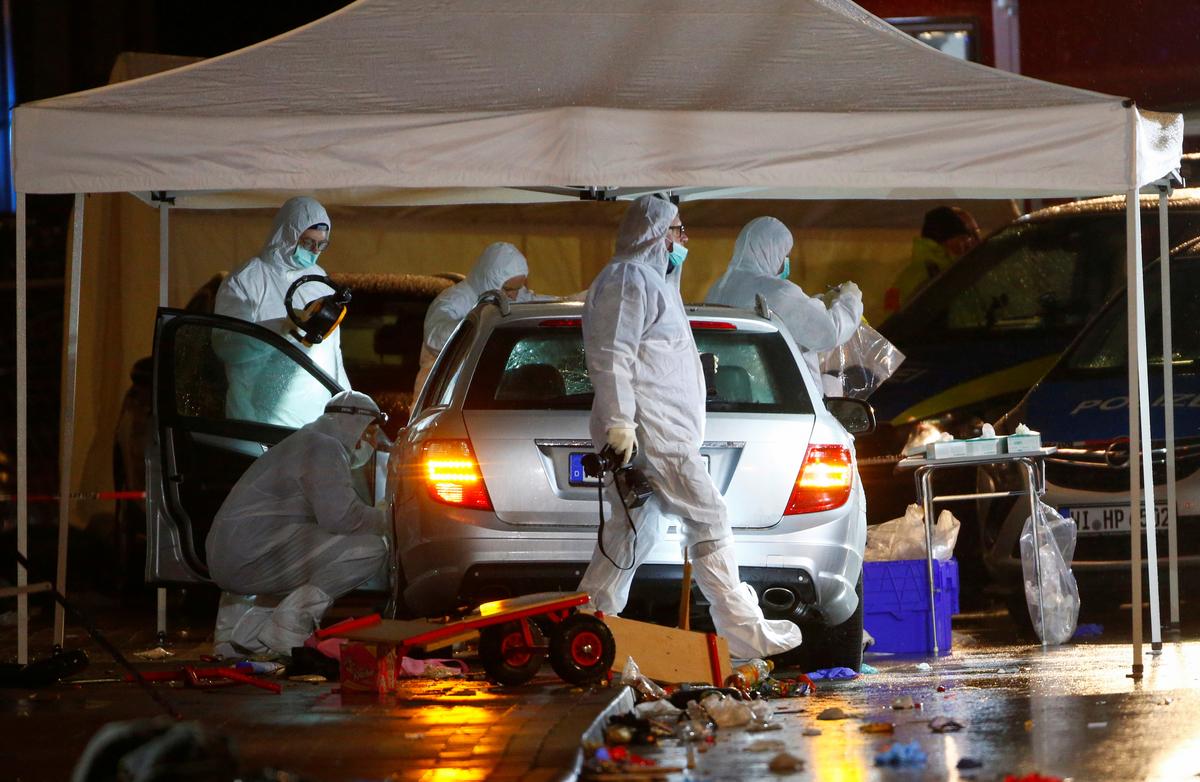 VOLKMARSEN, Germany (Reuters) – Germany increased security at some carnival processions on Tuesday after a local man ploughed his car into a parade in the western German town of Volkmarsen, injuring 52 people, including 18 children.

The incident on Monday shook Germans still struggling to take in last week’s racist gun attack on two bars in the town of Hanau which left 11 people dead.

A spokesman for prosecutors suggested they did not see a political motive for Monday’s tragedy when he said there was currently no indication the investigation would be handed over to national prosecutors.

The driver, who had been detained on suspicion of attempted homicide, was being treated for his own injuries. The prosecutors’ spokesman said he had not been in a fit state to be questioned overnight, but was not drunk at the time of the incident. Tests for drugs were due in the course of the day.

While some carnival processions in the state of Hesse, home to Volkmarsen, were cancelled, others were due to take place in the region on Tuesday. A police spokesman said security would be intensified.

Rose Monday is the height of the carnival season in Catholic areas of Germany, especially in the Rhineland where tens of thousands of people dress up, drink alcohol and line the streets to watch decorated floats that often mock public figures.

Prosecutors said there was no concrete reason to think that the risks of attacks at parades had increased, but they urged organisers to review their security arrangements and adjust them if necessary.

Security at public events in Germany has been tightened since a Tunisian man with Islamist militant ties ploughed a truck into a Christmas market in Berlin in 2016, killing 12 people. He was later shot dead by Italian police after fleeing.

Thirty five people were still in hospital on Tuesday, while another 17 had left hospital after treatment, police said on Twitter. Eighteen of the injured were children, the youngest of whom was three years old.

A police spokesman said he could not rule out that some of the injured were in a life-threatening condition.

Police, who had detained the driver, a 29-year-old German from Volkmarsen, said his motive was still unclear and investigations were ongoing.

The man, who had been driving a silver Mercedes car, would appear before a investigating magistrate as soon as his condition allowed, state prosecutors said.

“There are so far no indications of politically-motivated criminality,” Bild newspaper cited an investigator as saying.

“But we think that the perpetrator acted with intent, and that psychological problems may have played a role,” the investigator added.

Prosecutors confirmed that a second man had been detained at the scene on Monday and was accused of filming the incident. The spokesman said prosecutors were investigating whether the man had links to the driver, including checking phone records.

The street where the incident happened in the centre of the small town was still cordoned off by police on Tuesday and several stores in the area were closed. Residents were in shock.

“It’s terrible. I don’t know how somebody could do this, especially to children,” said 58-year-old Rainer Bellmann.

Locals told Reuters that police had searched two homes in the town, including one apartment near to the scene that a police officer said was the home of relatives of the man.

(Corrects spelling of town in text)