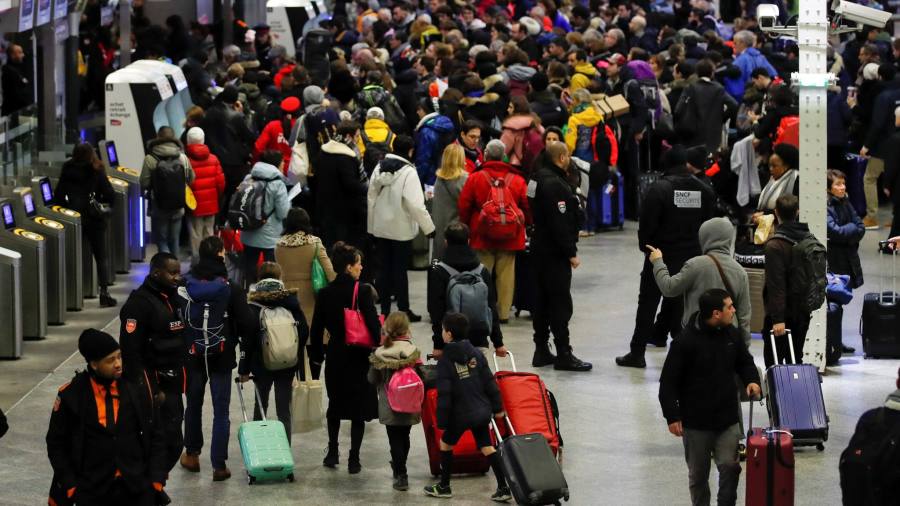 French president Emmanuel Macron has said he would give up his rights to an automatic presidential pension when he leaves office in a gesture to deflect public sector strikes that are disrupting the country over his flagship pension reforms.

Mr Macron is waiving his right to €6,000 per month before tax which would have kicked in when he stepped down and instead plans to bring the presidential scheme into line with his planned overhaul for the rest of the country, the Elysée said on Sunday.

“The reform of the pension system will apply to him . . . It is about being consistent and providing an example,” said a spokesperson for the Elysée Palace on Sunday, confirming a report by French daily Le Parisien.

The Elysée also said Mr Macron will not take up his allocated seat on the country’s Constitutional Council. French media reported that the position granted to all presidents, would have brought him another €13,500 a month for life.

Mr Macron is the first French president to give up his special pension rights, say the Elysée, and he is doing so as much of France is being hit by strikes against his proposed overhaul of the country’s byzantine pension system — the key economic reform that will mark the second half of his five-year mandate.

France has 42 schemes, some of them enshrining early retirement and generous pensions for categories such as state railway workers. Mr Macron, who is 42 and in the middle of his first term in office, wants to replace them with a unified points-based system and raise the effective retirement age from 62 to 64.

His efforts have met fierce opposition, with the strikes initiated by the leftwing CGT and FO trade unions bringing back memories of similar confrontations over pensions in 1995 and 2010.

Making matters worse, the man appointed two years ago by Mr Macron to spearhead the reform resigned from the government last week after failing to disclose paid and unpaid roles at other institutions that could be construed as conflicts of interest.

Mr Macron on Saturday called for a holiday truce in the strikes during a trip to the Ivory Coast. His government has also suggested a compromise on the reforms, offering to delay raising the retirement age if another way can be found to fund the retirement schemes.

Despite this, the protests and rail and metro strikes that have severely disrupted parts of the country and gridlocked Paris are set to continue throughout the holiday period.

Despite the disruption, 51 per cent of those surveyed by Ifop either supported or sympathised with the movement, in a survey released on Sunday in Journal du Dimanche. About a third were either hostile or against. The same poll last week showed support at 54 per cent.